skip to Main Content
The Search for Planet X app is now available as a website. Get the link!

Here’s a look at the research we did for the individual exhibit cards in World’s Fair 1893, with tips for researching themes for your own game.

World’s Fair 1893 takes players back in time to experience the wonder of this grand international exposition. In the previous post, I looked at the thematic research that went into deciding the overall structure for the game: the overview, the areas, and the types of exhibits. In this post, I look at the research required to identify all the individual exhibits.

As I dug into the bibliographies, I was astounded at how much information about the fair was publicly available. Books and other texts from that time are in the public domain, and many have been scanned and shared online by museums, libraries, and Google Books. The best sources for identifying individual exhibits were Rand McNally’s A Week At the Fair (online at Google Books) and The Book of the Fair (online at the Illinois Institute of Technology). Together these gave me overviews of many exhibits in the different areas that I could explore further.

I followed many rabbit trails researching individual exhibits. These books had some great overview information, but there was a lot of additional information I found in various places. For example, Scientific American published detailed reports from the fair every week; those are all available to read online. I visited a few libraries in my city, even pulling out a couple of books on microfiche! I spent countless hours reading many primary sources for information to include in the flavor text on the cards.

Here are two examples of many:

If you visited the Atlantic cable exhibit in the Electricity Building, you might have picked up this pamphlet. The Smithsonian Institute has a scanned copy of it in their online archives:

It details the history of Atlantic cables and the company, and it provides an overview of the exhibit. Page 8 explains how you could send a message from one end of the pavilion to the other, transmitted along the fully-functional model of the company’s cable.
View Pamphlet →

After paying 25¢-$1 for a ticket to the show, you may have also paid 10¢ to get a souvenir program book. Internet Archive digitized a copy of one of these books from the University of Illinois at Urbana-Champaign:

This book shows the order of the different acts, along with pictures of some of the animals and the trainers. View Program Book →

These primary sources were invaluable for finding reference images. Beth Sobel did the illustrations for the game, drawing on a wide variety of sources. The number of black and white photographs of the fair is staggering, made possible by the release of the first Kodak camera in 1888. Many of the public domain books had these photographs, as well as sketches and watercolors from artists. In addition to that, plenty of the exhibits from the fair survive to this day; I was able to find color photographs of many of them. From these varied sources, Beth created a consistent style for all the cards that really evokes the era.

STEP 5: RESEARCH MORE THAN YOU NEED

You will probably end up researching many things that you don’t end up using. That’s a natural part of research. I was certainly dipping in and out of sources to extract specific information (the price of a ticket to the menagerie, for example), but I also followed a lot of rabbit trails that ended up not making sense for the game. It’s the nature of research to explore the nooks and crannies of a topic, to find the edges, and to consider whether or not certain aspects of the theme make sense to include or not. 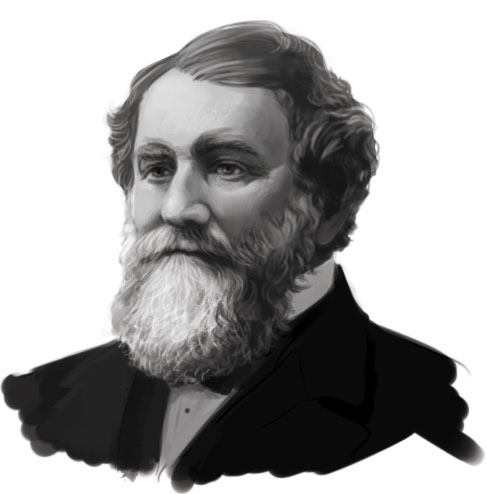 One example of this in particular stands out. In addition to main exhibit and Midway ticket cards, there is a third kind of card: influential people. These are all people who helped shape the fair and their industries at the time. Cyrus McCormick was one of the first people I decided to include in the game. Beth did the artwork for his card fairly early. Then during the Kickstarter campaign, I was writing an update about the history of the Great Chicago Fire. I did some extra research about him and his family. It was much more than (I thought) I needed to do just for the one sentence on the character card. I’m glad I did it! It turned out Cyrus McCormick had passed away in 1884 — nine years before the fair! Wait, what?

It turned out that the name “Cyrus McCormick” was mentioned repeatedly in The Devil in the White City, but it was referring to his son Cyrus McCormick, Jr. The Wikipedia page for the fair had led me astray: it mentioned “McCormick” and erroneously linked to the father’s profile page. I paid Beth for new artwork for the card, and I can now proudly say that a Wikipedia error cost me money. I submitted my first change to Wikipedia: I change the link to go to the son’s page instead of the father’s.

To recap, these are the five steps I took when researching World’s Fair 1893 and bringing the theme into the gameplay:

I hope these help you the next time you start to research a theme. I’d love to hear what kind of research you have already done. What approaches or tips do you recommend? Have you had any near-misses (or actual misses) like mine with Cyrus McCormick? Let me know in the comments below!

Separate Domains For Each Game

Countdown: 75 days. We have a domain name for our company, but we also have…

Countdown: 18 days. The project image and short blurb are incredibly important: these are all people see of…

A Tiny Publisher At Gen Con

Countdown: 55 days. Even without paying much for space, I demoed World's Fair 1893 and Lanterns…

This site uses Akismet to reduce spam. Learn how your comment data is processed.